Once again, congratulations to Rosey REPEAT for another superbly organised Love Music/Hate Racism stage at this years Strawberry Fair! Kudos to you for all the work you do for the cause in Cambridge. It is always an honour to play to support the work. 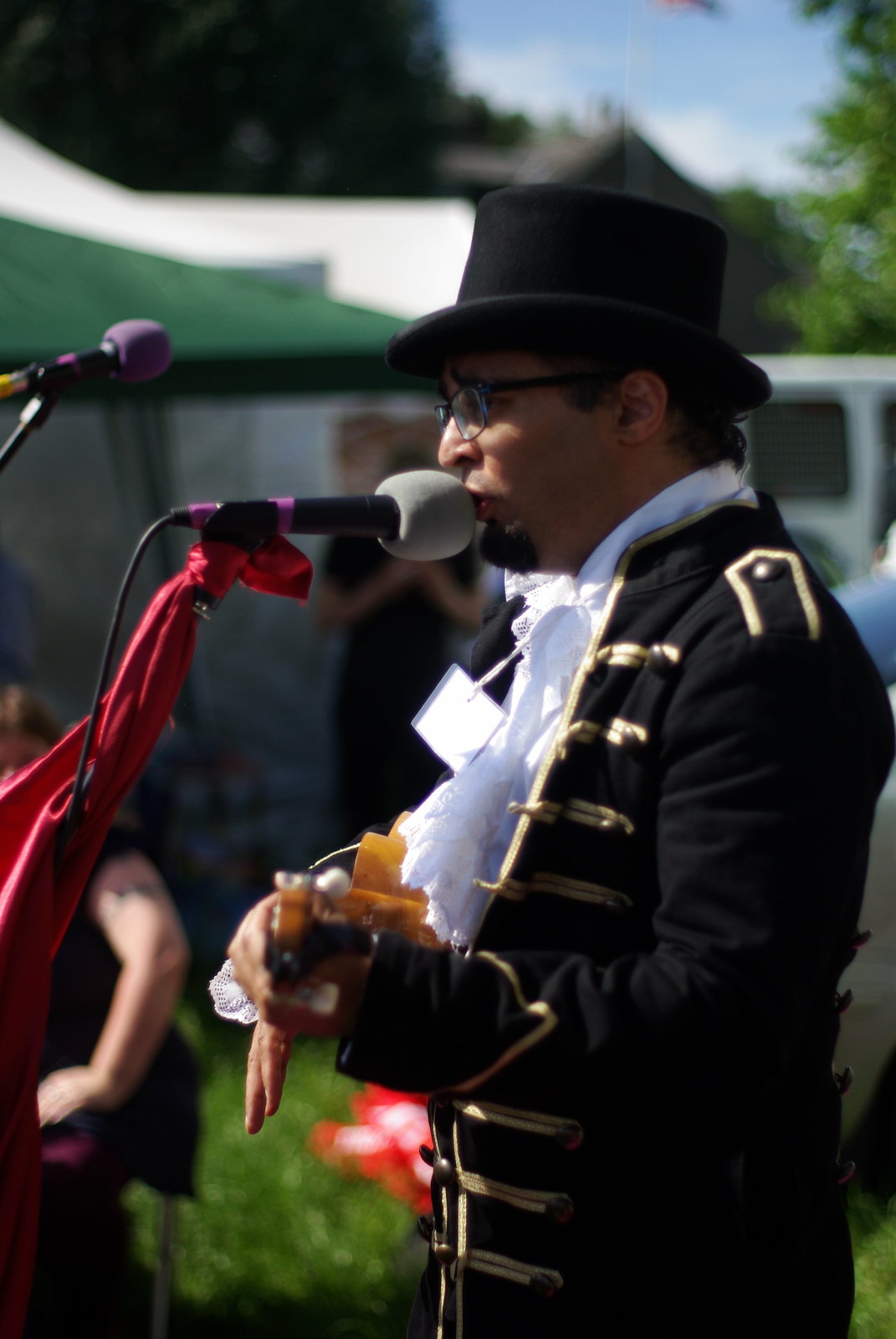 It was also great to see so a stage given to so many young performers, and watching Saltfen (who I had supported the week before) in action left me awestruck once again. These guys are really amazing. As featured on the You Flexi Thing Volume 2 by Repeat Records. And a shoutout the to Baby Seals for a great headline set.

The Oxjam Cambridge 2016 gig happened on Saturday. A mass takeover of 10 Cambridge venues, to raise money for Oxfam.

I played two sets – one at 2468 and other other at The Snug Bar in Cambridge. The former I’d last been into when it was the vaults, the latter I’d not been into since trying to catch up with Paul Richards after a CB2 gig. Though pre-gig I was trying to reminisce with Aidy about the dimensions of when the venue was the old Boat Race. I must have been playing on where the old stage was – it was by the entrance to the toilets! – but I couldn’t quite place the location of the door and the sound desk. And then when I put the bar in place it mentally seemed smaller than it used to be, though maybe it was larger in my memory than in reality.

I did get soaked going between the two venues – a rain storm just fell between the two sets. When I checked the weather in the morning I had been promised dryness. I left the Portland (where I went after performing) early because of this and had a migraine the next day. But nothing compared to what the people for whom these funds were intended go through. Still, got to see The Abstracts perform a really cool set, and bumped into the checkout lady at Waitrose who’d recognised me as Karmadillo the day before when shopping. Fame!

Lots of acts contributed, but special mention must go to the organising crew – especially Sandy Mills – and the sound people for the efforts they put in to making this happen.

Cheers to Aidy of The British IBM for the photo!

The song I was most nervous about showing my fellow band members was Rent Boy, a song about house prices in the UK. It has a lot of changing sections, and the outro was a parody of a song I first heard performed in the early 80s by a chap called Shakin’ Stevens. He was served up as a 60s rocker (I believe the phrase was Teddy Boy) and the song – This Ole House – it turns out was a cover version.

The song being a cover version is something I’d been aware of for a while. What I hadn’t been aware of, until reading this interview on the BBC website, was that this song was actually a clever metaphor for death, and inspired by the songwriter (“singing cowboy” Stuart Hamblen) finding a dead body lying in a deserted shack! The lyrics play with the gospel concept of the mortal body being a “house” for your soul, that gets left behind when you go to “meet the saints”. Not something I’d ever appreciated before.

Ironically I am writing this at 5.30am as the house I am currently renting is next to the A14 and I find myself being awoken by passing heavy goods traffic going along at 60mph every day. Come on guys – if only 300,000 of you purchase Karmadillo albums I’ll be able to buy a decent place of my own!

Remember this cheeky chappie driving around on the moon?!

Well now he’s putting on a show in Cambridge – 1st October at The Cornerhouse!

Another Karmadillo performance at the Cambridge Corn Exchange – had a great time entertaining again! Here are some photos thanks to Gareth Millar Photography!

The theme for this video is inspired by the Doctor Who story Shada, and recreates The Fourth Doctor (the Tom Baker one!) being chased around Cambridge on a bicycle by a giant white blob. Special effects meant we could get the giant white blob chasing though we couldn’t quite manage the barbershop quartet in a doorway! A ludicrously long scarf as well as the charango was too impratical but there is a McCoy era tank top and a Davidson era celery stick!

Without further ado … the music video to the song MISSING U by Karmadillo.

Many thanks to Rob Kemp, who directed the video early on a Sunday morning and figured out the locations for the original scenes from Shada – Thanks!

There has been a bit of a hiatus but now the winter is over, Avarice the charango has crawled out of her hidey hole and once she’s had a couple of whiskeys will be ready to hit the road again.

some gig dates for 2015 are starting to fall into place. The first Cambridge one is at Relevant Records on April 2nd, but before that the first London one is at The Bohemia Hackney on March 14th!

More will come – See the EVENTS PAGE for full details.

Then check out Singing Science for songs about the wonders the world of science has for us! Plus, tunes now available from Genomics! The Musical!

No events
Tweets by karmadillo_band